When I first read that Friday afternoon I yipped, and I never yip. But the unbridled joy I felt knowing that the noxious stink of petulant gloom that Milt had become will be reporting to another clubhouse this February came out as an honest-to-god yip.Â  You canâ€™t control these things. We are free! 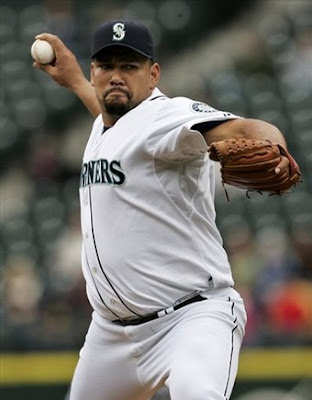 The lesser of two evils

Hats off to Jim Hendry for fooling the Mariners. I think he had the Seattle trade in his back pocket and was just waiting to see if he could get a pitcher who didnâ€™t just have major surgery on his throwing arm in the past year. But he didnâ€™t want to spoil Christmas for us hard suffering fans so he pulled the trigger.Â  I donâ€™t care if Carlos Silva is the Venezuelan Mel Rojas. Iâ€™ll stand up and applaud every home run he gives up so long as he smiles every now and then and doesnâ€™t bring up the 1908 thing too often.

The biggest move of last yearâ€™s off-season was the acquisition of Milton Bradley.Â  The biggest move of this yearâ€™s off-season was extricating him from the cubsâ€™ roster. Itâ€™s not even that I hated Milton Bradley, itâ€™s that I found him uninteresting. From day one he has displayed a remedial understanding of media and human relations, and it only got worse as the season progressed.Â  As he sees it, everyone is actively and covertly out to get him.Â  Called third strike: the umpires want him to fail.Â  Ill considered quote: the newspaper writers tricked him.Â  Forgot the number of outs in right field: Cub fans are racists.

Milton vs. the world is a tired repetitive story and Iâ€™m just glad itâ€™s over.Â Â  Now I donâ€™t have to spend my days walking in circles wondering why Milt is so angry and how Hendry hoodwinked himself into thinking Bradley has matured.Â Â  I can watch from a safe distance as Ken Griffey Jr. does his best Mother Teresa impression and attempts to fix Milton.Â Â  Good luck Junior,Â  your patience and perseverance will be severely tested. We however, are free!

There are no comments yet...

Kick things off by filling out the form below.